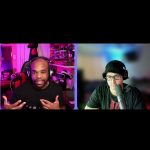 DrDisrespect has been banned on Twitch! A month later and the details behind the sudden drop still remain unclear. In the wake of the Mixer platform fallout and potential rise of the oddly named streaming platform Brime, we are left with more questions than answers. In this episode, we break down our own theories behind the ban, as well as predictions for the future of streaming.